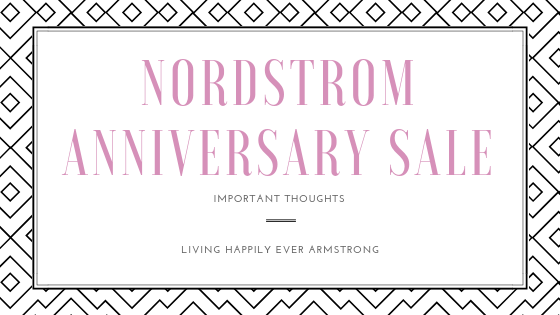 Are you ready for the Nordstrom Anniversary Sale?

It’s that time of year again! The Nordstrom Anniversary Sale. Are you ready for all the #NSale madness? Every blogger under the sun will be covering this sale, for good or for bad.

As a former Nordstrom employee myself, I bleed Nordstrom through and through. I’ve been shopping the sale ever since I can remember, literally some of my earliest memories are sitting down with the shoes salesmen in the kids department with my mom. They would have binders with pictures of the shoes that were going to be for sale and we’d pick out our new school shoes for the year. This is before the age of blogs, social media, or even really the internet.

These days, the sale has changed drastically. This year is even completely different than in years past. Nordstrom changed their rewards program recently as well, in the past, you have 4 levels of cardholders and only level 4 customers got to shop a day earlier than everyone else. Now there are 5 levels, a little more attainable than level 4 used to be, and they get to shop 2-3 days earlier before everyone else, including online which has never happened before.

Most of your big time bloggers are now Icon or Ambassador (top 2 levels) status now, which means they’ve already shopped the sale. I’m just a standard cardholder (peasant status haha) so I won’t be able to shop until tomorrow July 12th at 12:30 EST when the sale goes live to cardholders or in person. Public access (people who don’t have the Nordstrom card) begins on July 19th.

History of the Nordstrom Anniversary Sale

WHY IS IT EVEN A BIG DEAL ANYWAYS?

Now let’s talk a little bit about this craziness.

The Nordstrom sale is a little different than any other sale in the sense that it’s all brand new merchandise. A little insider’s info, the anniversary sale actually started because July is typically the slowest month for retailers. People aren’t back to school shopping yet, there’s no holiday to buy gifts for, and everyone is on vacation. To entice customers, Nordstrom decided to bring in all their fall merchandise early and put it on sale for the beginning of the season. That’s one way that Nordstrom is different, they only run a few select sales a year. The Nordstrom anniversary sale in July is always the biggest and they have 2 half-yearly sales for men and women as well.

So that’s where all the hype came from.

Now, I want to make this clear, this is just another sale. It’s a big deal because Nordstrom doesn’t run sales very often, as I stated above, and it’s the first sale of fall product before the season, but at the end of the day, it’s just another store and it’s just another sale. You do not need anything from the Nordstrom Anniversary Sale. Let me repeat that. This is not life and death, nothing that is for sale this next week will make or break you. Nothing is life-changing, nothing is magical, it’s all just sweaters, jackets, and shoes. Will I be shopping the sale? Of course! But I’m only looking for very specific things that I feel like are holes in my wardrobe, just like how I shop any sale.

Also, insider tip, they will restock everything after the sale is over and try to sell it for full price. If it doesn’t sell, it will go on clearance or get sent to Nordstrom Rack where it will be sold for even cheaper than the anniversary sale price. So ask yourself if you really need that item because odds are, you may be able to find it for cheaper later. Just the other week I bought a sweater that was part of the Nordstrom Anniversary sale last year and I paid $3. Yep you read that right, $3. It was a $70 sweater normally. Now that is definitely the exception and not the norm but be on the hunt at your local Rack because you never know what will show up.

I’ve also been seeing a lot of misinformation out there about this sale. I don’t think it’s bloggers/influencers’ faults by any means, they’re just doing what everyone else is doing, but as a Nordstrom Anniversary Sale veteran myself (we’re talking at least 20 years of experience, no joke), let me set the record straight. The deals aren’t that great, I’ll be honest. We’re talking like 15-30% off regular price. I typically like to shop at least 40-50% off, ideally 60% off or more for reference. I score most of my big ticket items for 75-90% off to be honest. But I’m a bargain shopper. I live for the hunt and I don’t pay full price for hardly anything, literally kills me inside to pay full price actually. I avoid it at all costs. So yes, I have been shopping the sale for a very long time but I’m not buying everything under the sun and I don’t think you should either. Be selective. Buy pieces that you’ve been wanting for a long time or buy items that never go on sale. Buy timeless things, not trendy items, that will last you years to come. Or maybe skip the sale altogether! My point is, don’t buy into the hype and feel pressured to make purchases you can’t afford simply because you feel like you’re going to miss out on something (FOMO is so real). Yes, there are some amazing pieces that are a part of the sale, there always are, but this is just the first sale of the season! Other retailers haven’t even come out with their fall merchandise yet. There are many more options to come. If something sells out, Nordstrom will usually restock or someone else will come out with a dupe. Don’t fret, don’t go into debt, don’t feel pressured. At the end of the day, this is just another sale.

Now to change direction a bit, I do want to explain one other thing really quick while you’re here. If you do choose to shop the sale, please support your favorite blogger! If you buy something because you saw it from them, use their links. People are spending hours upon hours creating content and doing research for this sale. This is their job, this is how they support their families. It doesn’t cost you anything to use their links so please give credit where credit is due. Nordstrom offers free shipping so the best part about this is that you can shop around using different people’s links to give different bloggers credit for your sale. Think of it like a finder’s fee. In a sense, they’re acting like your personal shopper and if you’re consuming their content, you shouldn’t expect them to work for free. The least we all can do as consumers is support them by reading their blogs and using their links. Just my two cents.

Also as a side note, cookies are dumb and don’t work when you use any app besides your web browser. So if you use someone’s link and then checkout in the Nordstrom app (or Amazon or whatever the link is for), they won’t get any credit for your purchase so it’s like it never happened. I hope this changes in the future but as of now in 2019, this is the case so try to be mindful of that! I know it’s annoying but that’s just how it works.

PHEW. LET’S WRAP THIS UP

Well there you have it! My almost 1500 word blog post all about my thoughts on the Nordstrom Anniversary sale. I’ll be posting up my picks and what I think I’ll actually be shopping later as well. Don’t feel pressured, I’ve just had some people ask what my opinion is so I thought I would share. Take it with a grain of salt and make your own decisions about the Nordstrom Anniversary Sale whether you decide to shop it or not! The choice is yours.

The 247th Marine Corps Birthday Ball A great nigh

I don't know if I have words to encompass everythi

I never realized how much I loved the ocean until

Disneyland will always have a special place in my