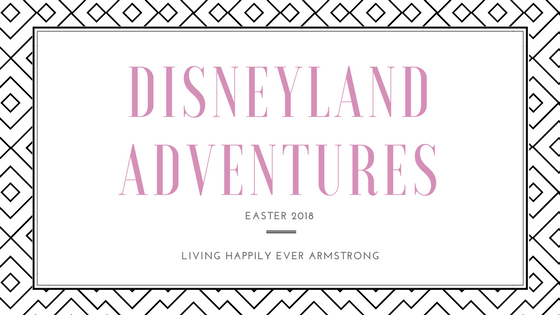 We’ve started a new, mini tradition of having brunch at Easter at Disneyland. Last year, we went to the famous Carnation Cafe. This year, we started off the day at Storyteller’s Cafe. I’ll be doing a full recap and review in my new series called Disneyland Eats soon! I’ve had many requests for more in-depth reviews and recommendations on where to eat so I thought I would break it all down for you. Let me know if there’s a specific restaurant you’re interested in and I’ll be sure to review it soon.

My short, mini-review is this: we’ll definitely be back. If you’re looking for a more “adult friendly” character breakfast, this is by far the winner in my eyes. The food was amazing. The characters were a blast. The atmosphere was so fun. Here are some highlights below.

Time to head to the parks! Naturally, being a holiday, it was crowded. That’s a given almost any day now. If you’re planning a trip to Disneyland, prepare for the crowds. It’s just inevitable.

One of my main goals for the day was to ride Pirates of the Caribbean. If you didn’t know, the famous redhead scene (seen below) is being changed in about three weeks. You can read more about that controversial decision here.

P.S. I took this shot on my phone, not too shabby! If you’ve been on Pirates, you know the lighting is horrible in there. One of my goals this year is to improve my photography skills aka learn anything at all about real photography besides the rule of thirds that everyone already knows.

Next, I checked the app and scheduled our one and only fast pass for the day. If you don’t have MaxPass yet, you’re missing out. MaxPass is $10 a day or $75 for annual passholders for the whole year. It allows you to reserve fast passes through the app anywhere in the park as well as gain access to unlimited downloads of your PhotoPass pictures, aka any pictures you can get at Disneyland, attraction pictures, professional pictures, all of the above. I think that alone makes it worth it! Anyways, that’s my two-cents about that. I saw that Space Mountain, one of my favorites, had a slot open at 1:30 so I snagged it. While we were still on Pirates by the way, we were waiting to unload. That is the beauty of the app!

Now we had about an hour and a half to kill. One of my favorite things about having annual passes is we get to take the parks nice and easy. There’s no pressure to feel like we have to do everything all in one day, it’s a beautiful thing.

Last year, we took some photos in front of the castle and so naturally I wanted to replicate that. I’m all about traditions! So with some  gentle prodding, Nick agreed on this plan.

I’d say it was worth it. Except for the minor glare on my glasses (can anyone teach me some photoshop skills?), I like this picture even better than last year’s! Sleeping Beauty’s castle never gets old…it may be smaller than all of the other Disneyland castles out there in the world, but this one was Walt’s and that will never be beat.

Another big highlight of the day was these ears! Shoutout to my friends Vanessa & Fabian for getting up early and waiting in the super long line to snag these. Disney released them on Sunday and they’re currently sold at the World of Disney store in Downtown Disney exclusively for the next two weeks. After that, they’ll be releasing them throughout the parks, I believe in Disney World as well. I think these are my new favorite pair of ears! I love the bow on these, I’m a fan of the “puffy” bow and I’m obsessed with this one. I am becoming a fan of this millennial pink trend going on! Took me a little while to come on board but now I’m all about it. I feel like they were the perfect Easter ears as well.

After a quick popcorn break, Nick’s favorite treat in the parks, it was time to ride Space Mountain. Pro tip: request to sit in the back if you like thrill rides. Space Mountain may seem like a kid’s ride until you’re in the very back. I swear it feels 10x faster and more intense; it’s the best! We weren’t in the very back this time but it’s enough being in the last car that even Nick cracked a half smile 🙂 (hint, that’s rare).

Now it was time to hop over to California Adventure. The Food & Wine Festival is still going on, highly recommend coming to DCA during this time of year; the food is the best! I’m still working through my Food & Wine pass that you can buy as an annual passholder so here were my selections for the day as well as an appearance by Mr. and Mrs. Incredible! I was standing off to the side in World of Color viewing area when they just appeared next to me. No idea where they came from, makes me wonder if there’s a trap door or something down there or just plain Disney magic…hmmmm

The first picture is sweet corn nuggets with beef chili. They had it last year as well and it was one of my favorites from the Off the Cob booth. The last picture is a spicy teriyaki slider, another pick from last year at the LA Style booth.

The Food & Wine Festival ends on April 12 so there’s only about a week left! I still have five more tickets on my pass to use up, anyone want to make a trip with me and eat some grub? I need a mac & cheese buddy.

Now we began to wrap up our day as we had to head back home to head to church for our Easter service (Side note: we ended up going to the night service instead. Last year, we actually went on Saturday evening. Our church offers night services to help make room for guests on Sunday morning, they anticipated a large number of guests for Easter. But Nick actually ended up working all day Saturday, such is military life, so we opted in for the Sunday night service instead this year. I actually really enjoyed it! It was a great way to wrap up our Easter weekend. You can read more about my thoughts after hearing the sermon and reflecting on our Good Friday service as well here.)

On our way out, we stopped in Bug’s Land so I could snap a few picks and pick out some of the details. If you haven’t heard, Bug’s Land will be closing soon to make way for a new Marvel Land. I’m excited to see what Disney comes up with next but sad to see of these iconic features go. Bug’s Land is a great place for kids so if you have a trip planned soon, I’d definitely make it a priority to spend some time here!

Last, but certainly not least, we stopped at the Starbucks in California Adventure to pick up one of these beauties: the rose gold macaron. I had it boxed up to go because I was so stuffed from all the food we ate that day and I think I was stopped three or four times on our way out of the parks to ask where it came from. It’s so beautiful! Tastes delicious too. I’m very happy that Disneyland is getting on board with the rose gold obsession that has taken over the internet.

I also begged Nick to snap a photo with one of these cute Easter picture frames they had around the park. It’s very shadow-y but it’s still a fun memento from our day at the parks. It’s these little things that make Disneyland so magical.

Well that wraps up our Disneyland Easter Adventure! Thanks for tagging along with me. ‘Til next time.