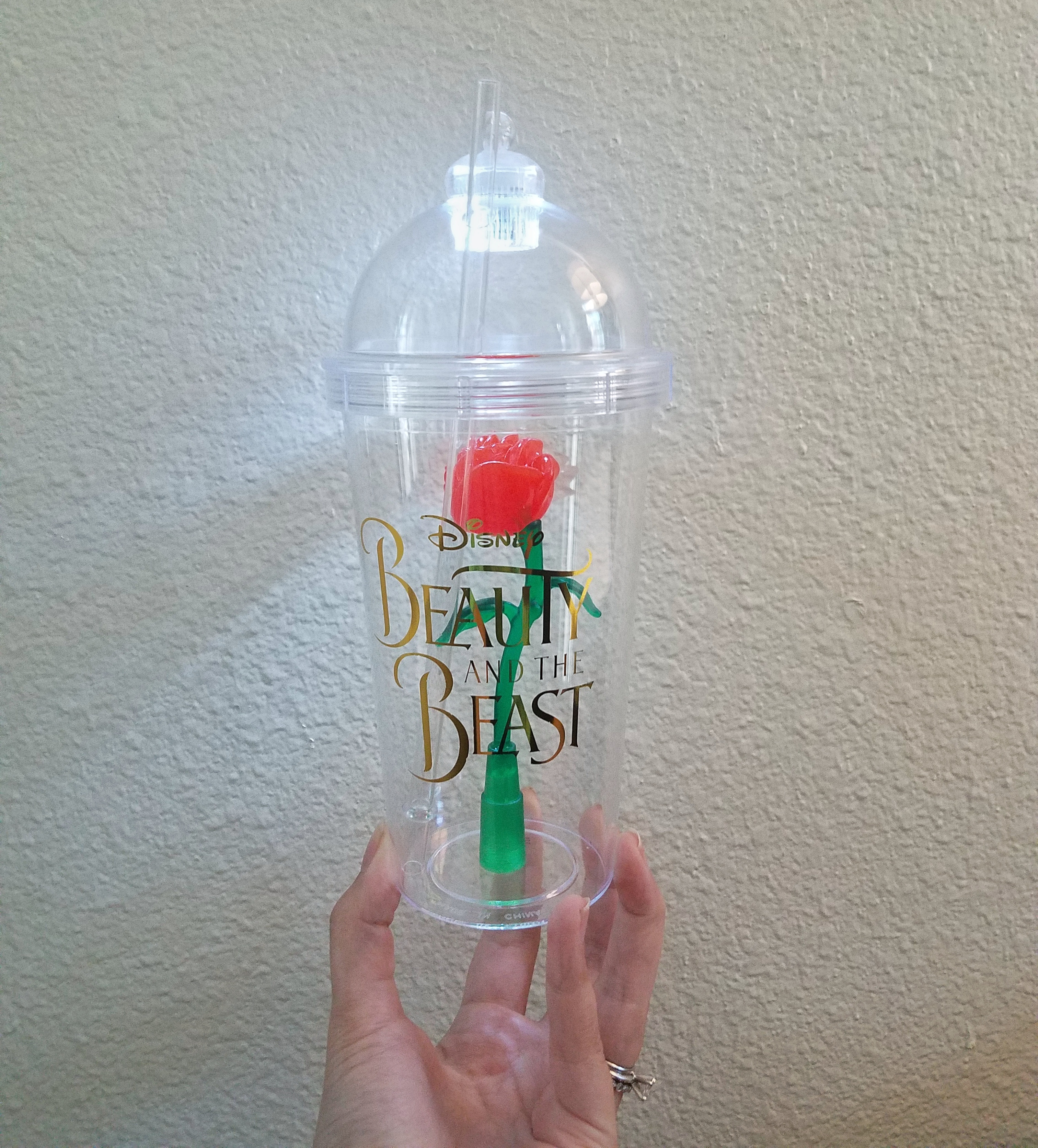 Yesterday afternoon, I went on a spontaneous solo Disneyland trip. And it was amazing.

The crowds were low, rose cups were in stock, and magic was in the air.

*Rose cups, for those who aren’t aware, first showed up sometime in February (they’re Beauty & the Beast themed) and have been sold out ever since. Every time they come back in stock they’re gone within the same day. They’re usually only sold at 2 locations but yesterday they (finally!) had so many that they started putting them out on shelves in some stores. I didn’t even have to wait in line.

I started off my trip by simply walking around. I checked out Hollywood land and the new Guardians of the Galaxy ride area before the madness begins on opening day (which is today). I headed over to Disneyland and sat by the castle where the band was wrapping up their performance. I didn’t really have a plan or a goal (I already had my rose cup). I started to think about things we don’t normally do or haven’t done in a while. That’s when I found myself heading towards Pooh’s corner.

A little backstory, I LOVED Winnie the Pooh growing up. The characters have always had a special place in my heart. However, the line to meet them is usually long and since it’s all outdoors, the characters take frequent breaks, meaning we usually don’t even try. Today I noticed the line was short so I hopped in line.

I quickly realized that everyone around me had a group; people to converse with and plan with. I was only in line for probably 5-10 minutes but in that time I gathered that the group in front of me was visiting from far away and had never been to Disneyland before and the group behind me was a bunch of sorority sisters who all made matching Winnie the Pooh themed hair bows. As I waited to get up to the front I became so aware of my aloneness. I didn’t have anyone to take my picture or join me in a picture. I shyly approached Eeyore. He gave me a big hug and waved at me. I looked around, no one was paying attention to me. No one offered to take my picture. I held up my phone and said (half to myself, half to Eeyore), “well I guess we’re going to selfie then!” Eeyore leaned his head in and made little clicking sounds with his tongue, pulled me in and posed for the picture. Like it was totally normal.

Now that little interaction took maybe 30 seconds. It was meaningless to the people around me and probably even to Eeyore. But to me, it meant everything. That whole scenario mirrors a lot how I feel right now in real life, lost and alone with no one to take my picture or be in my picture with me and no one paying attention enough to step in and offer. Moving away from everyone and everything you know is hard. But at first it’s exciting. Especially with post deployment and getting to live with Nick for the first time and really starting our marriage. But here we are, 9 months into it, and the excitement has worn off. This is the time when real life kicks in. I’m working, he’s working, we have our schedules and routines, but one thing is missing: our community.

Yes, we have each other, we always will, and for that, I am eternally grateful. The community I’m talking about is people to do life with us. I crave connection. Someone to just “get it.” Be on the same page. Walk alongside us. Take the picture with me.

It’s been a tough time of life lately. I’ve been struggling with depression and anxiety in a way that I never thought I’d ever experience. In my heart I know I have so much to be thankful for and I’m incredibly blessed; I have a job that I love, a husband that appreciates me, a roof over my head, Disneyland passes (which is a dream come true!), and so much more. But my head is struggling to let me see that.

I want to say that I’ve leaned on God during this dark time but if I’m honest, I haven’t. Right now God feels very distant and abstract to me. I feel alone in a crowd of people and alone in a universe created by an almighty Creator. I’ve prayed for my attitude and perspective to change. I’ve prayed that I figure out how to lean on Him and not try to do it all on my own.

Reflecting on my Disney trip yesterday, I feel like Eeyore, the character that represents depression and anxiety, was God’s way of reaching out and comforting me. Telling me it’s okay to feel alone and overwhelmed. It’s okay not to have everything figured out and put together. It’s okay to be where I’m at. But He’s got me. He’s there to take the picture with me. Even if He can’t physically tell me all that through words, He’ll never leave me nor forsake me. And He’s not going to leave me there in the state I’m in.

I gave Eeyore another hug and moved on to the next character, Rabbit. This time there was a cast member there to take my picture. I walked up to Rabbit and he grabbed my hand and gave it a little kiss. I laughed and the cast member said, “oh Rabbit, always such the charmer.” We took a couple pictures and I told them both thank you before I moved on.

I’ve also been struggling with self-image issues. My health hasn’t been my friend lately which has caused a lot of hormone imbalance and some weight gain. I haven’t been feeling like myself, mood wise, which has led me to be extra hard on myself. I look in the mirror and I see everything I need to fix or correct. I used to love getting dressed up everyday; fashion was a huge passion per-say. I mean I even had a fashion blog! But lately I just want to be in sweatpants and a t-shirt everyday. Which has led me to feel very non-feminine lately, something that used to be a huge part of my life.

Rabbit probably does the hand kissing routine with everyone, I know it’s nothing special. But it did mean a lot to me. Isn’t it silly how a person in a giant rabbit costume can touch my heart? That’s one thing that I’m learning a lot about lately; it’s truly the little things that make the most difference. Just by acknowledging that I’m a girl and acting like a gentlemen, Rabbit helped remind me of my worth. It’s all about the little things.

The last character was Piglet! I love Piglet. One thing about Piglet is he is scared of everything but yet I think he’s the most courageous character out of the bunch. If someone needs something, he’ll do it no matter what it is. He faces his fears (when he needs to) and it leads to amazing things.

I faced one of my fears yesterday; being alone. And I ended up having an amazing day. I even was able to meet Cinderella and snap a selfie.

Do you want to know why I love Disneyland so much?

One of the reasons is the atmosphere and experiences. Everyday is magical because the people that work there make it that way. You walk in and the air feels lighter and people are friendlier, anything can happen. It’s like Disneyland is in this little bubble where it doesn’t matter what’s going on in the rest of the world; it’s an escape from reality.
Another reason is you’re treated the same as everyone else. It doesn’t matter if you’re 4 years old or 40, cast members and characters will interact with you and make you feel just as special. There’s no judgement.

Nobody does it better than Disney. There’s just nowhere like it anywhere in the world. I will always love it and I’ll always be drawn back. It’s become a place of comfort to me, somewhere to be myself and accepted for it.

Thank you, Walt Disney, for having the dream and working towards it even though everyone said it couldn’t happen. I doubt you had the intention of making it a place to remind me how much God loves me but God can use everything and I’m thankful He uses Disney to speak to me in my language. I pray you find the outlet that God can use in your life to do the same.

I’m still on my journey and I’m nowhere near done, but I’m learning how to stand on my own two feet again. And just like Eeyore, every time my house falls over I’ll pick up the pieces and keep rebuilding.