I have officially survived in a different state. I still feel like I’m on vacation and I probably will for the remainder of my time here since it’s so brief. I’ll break down this series into our individual day trips so you’re not here all day reading for hours. You’re welcome.

Our very first stop was of course, Disneyland! This was one of Nick’s wedding presents to me. Cars Land, as always, was a favorite. If I could, I would live there. I’m not kidding. I’ll attach some pictures below, probably low quality because both of our phones were dying and I don’t want to pay $20 to download the “professional Disney ones” haha. It has always been my dream to see Disney all decked out for Christmas and I was so excited that it finally worked out. Even better, my darling husband managed to score free tickets for us! (which means I may be able to convince him to go one more time before he leaves…but that’s just between you and me wink wink)

We actually went on Nick’s birthday so to celebrate, we ate lunch at Carthay Circle, a restaurant reproduction of the Carthay Circle Theater which is where Walt Disney showcased Snow White and Fantasia for the first time. Fun fact, it is actually the largest reproduction replica of Carthay Circle Theater as the original was torn down in 1969. We decided to buy the World of Color dinner package, which I highly recommend if you’re planning a trip to Disneyland any time soon. World of Color is the nighttime showcase at California Adventure and it is in the top five of the most spectacular things I have seen in my life. If you’ve gone, then you know it is impossible to find good seats, even with the fast passes that they offer. Since we were celebrating our honeymoon and Nick’s birthday, we decided to splurge and spoil ourselves a little bit. The package included a three-course meal and reserved center row seats to the show. The food was the fanciest meal I’ve ever had. I couldn’t understand most of the menu as it was in another language. Nick ordered the burger and even though it was “only” half a pound, he will swear that it was a full cow! He took two bites and claimed he was full already haha. It was the densest, most filling burger I think that ever exists. It was amazing though. I ordered a chicken pasta type dish, I cannot remember what it was actually called, but I’ll include a picture. It was amazing. Dessert was both of our favorite parts though. It’s always my favorite part 🙂

The rest of the day was spent on ride after ride, line after line, if we’re being honest here. I downloaded a new app, MouseWait, which shows you all the current wait times in both parks. We got fast passes for Radiator Springs (one of my favorites) and Space Mountain, which is now HyperSpace Mountain, Star Wars themed, right off the bat and then mapped out the rest of our day. Since HyperSpace Mountain was something neither of us had seen before, we decided we wanted to wait in line so we would have the opportunity to ride it twice. After waiting over an hour and a half, conveniently the ride broke and managed to stay broken the rest of the day. I was pretty bummed. We’ve been spending several days trying to binge watch the entire Star Wars series before we see the new one so I was looking forward to the Star Wars craze going on right now in Disneyland. I hear rumors that they’re actually going to build a Star Wars portion of the park that remains permanently there.  Regardless, we will be back to ride HyperSpace Mountain soon.

At this point, my phone was dead and Nick’s phone was on it’s last dying leg, so there aren’t many pictures from here on out. We ended the night at World of Color which I cannot recommend highly enough. Because it was still Christmastime in the park, we actually were lucky enough to get two shows, the winter special and the 60th anniversary show. Since our phones were dead, I’ll insert a youtube video of the second show if you’re interested. It definitely doesn’t come close to doing it justice, but it will give you some sense of being there 🙂 Nick’s favorite part is the Star Wars sequence near the very end with the balls of fire. 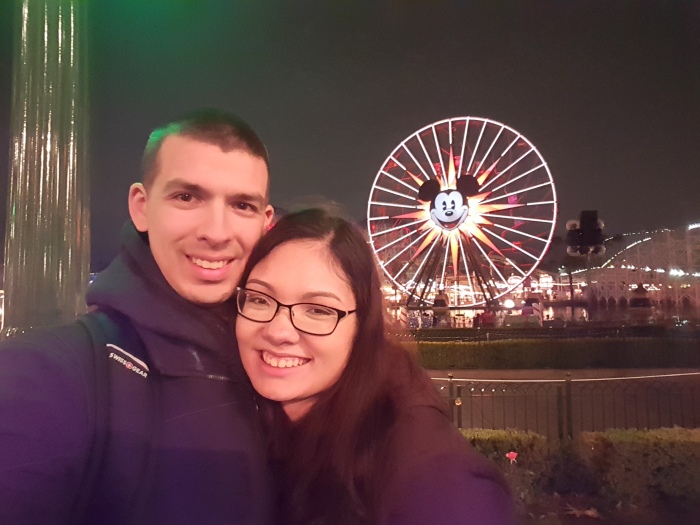 That concludes our Disneyland adventure! It was a very full day, we were both exhausted afterwards. Till next time Disney. I’ll be back 🙂

Stay tuned for part 2, our trip to the wild animal park in San Diego.

One year ago today, I walked into the scariest doc

Disneyland reopened today for the first time in 41

I want to share a cup of coffee with you! ☕ *GI

On my way home from the Most Magical Place on Eart

Today is a special day because my best friend turn